The Top 5 Benefits of Our Priapus Shot

In theory, most men want the effects of male enhancement surgery. It can beneficially alter the shape of the penis, make it more substantial, and often can impact the pleasure of his sexual partner as well as himself. Studies have even been preliminarily conducted on its impact on erectile dysfunction disorder. However, there are many drawbacks to the surgery — the pain being only one. Male enhancement surgery can increase the risk of heart attack and pneumonia. Finally, recipients of the operation must pay for the expense of the surgery out of pocket as no male enhancement surgery is covered by insurance and they must abstain from sexual intercourse for six weeks. 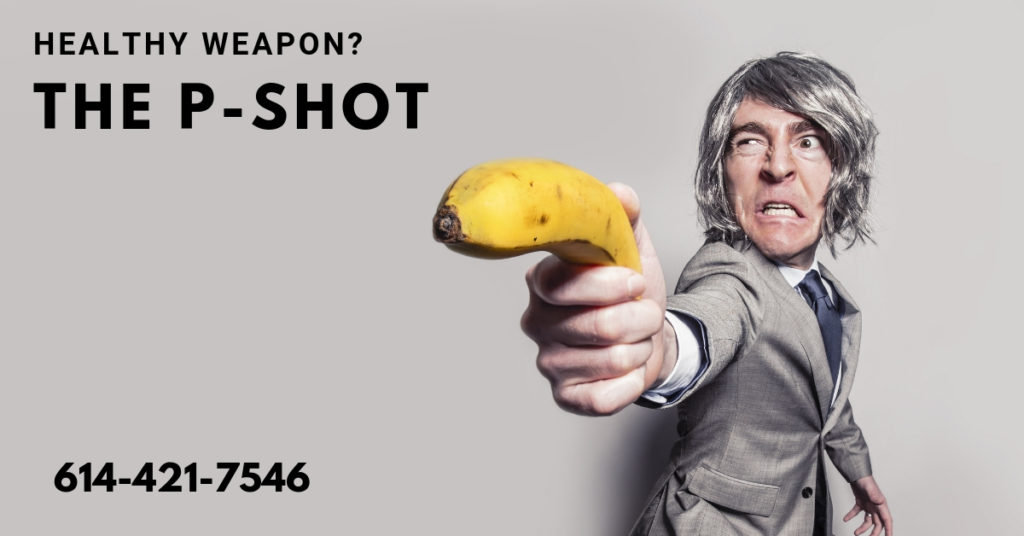 The Priapus Shot Can Be Used to Improve Sexual Health

Erectile dysfunction aside, the shot can also enhance the feeling of pleasure felt by those who receive it. Since the shot improves blood flow to the penis, it can make a marked difference when it comes to initial touch and arousal. Finally, many sexual health issues can be linked to poor self-esteem. Because the P-Shot focuses on some of the things that men find most embarrassing related to their sexual health, this can improve self-esteem and subsequently enhance their sexual function.

The Shot is Painless

We understand that getting a shot to the genitals might be cause for concern, which is why at our clinic we provide local anesthetic to the penis before giving the shot. Because the shot involves pulling plasma from the arm, the patient might experience the same sort of pain and/or discomfort in the area of the arm where plasma is drawn. This will feel similar to getting a shot or getting blood drawn. However, the procedure itself will not hurt, and most patients do not feel much in the way of discomfort after the procedure.

Some side effects might occur, including bruising around the area of injection and occasional pain during erections for the first few days, but this quickly fades, and many do not even experience pain at all after the procedure. If you are a patient that received the priapus shot and is still experiencing pain more than a week after the procedure, please contact our office, and a provider will look at your case.

The Shot Can Shape the Penis Into the Desired Shape

One of the biggest reasons men seek out male enhancement surgery is because they are unhappy with the way their penis looks. In truth, the size and shape of penises are highly variable, and while six to eight inches for size might be statistically standard, it is a lot harder to verify that other people have odd shapes to their penis. Penis enhancement surgery does fix penis size and shape, but it also asks a lot of your body. You must wait at least six weeks before having sex again, and you must take very good care of the area of surgery to avoid infection. For more severe penis shape issues, like Peyronie’s disease, the Priapus shot can fix these issues without the pain and recovery time associated with male enhancement surgery.

Another downside to male enhancement surgery is that it usually requires that the man gets circumcised before the procedure. If a man is uncircumcised by choice or out of belief, this can make the decision much harder. Additionally, getting circumcised when you are older can be troublesome and lead to some nasty side effects. The Priapus shot allows you to reshape your penis without having to consider more invasive surgeries like circumcision and silicone implants, thereby saving mental and physical stress.

There is Little to No Downtime

The Priapus shot is done in a single day and takes care of many of the same issues that male enhancement surgery does. However, male enhancement surgery is a serious commitment. It takes weeks of your time to recover, as it permanently implants silicone into your penis and requires a very invasive procedure. The shot takes only an hour of your time, and most patients need to alter their lifestyle only a very little for the first few days after the shot due to shot-related after-effects. Although the results are not instantaneous, comparable results are available in a few weeks.

Although the Priapus shot treatment is different for all patients who receive it, it is important to remember that the procedure itself is relatively simple. By drawing plasma rich platelets from the arm and injecting them into problematic areas of the penis, it is possible to achieve comparable results for far less money than implants. The cost of the procedure is as much as $13,000 less than a surgical implant.

Are you a male with issues getting and keeping an erection? Or are you unhappy with the shape and girth of your penis? If so, the P-Shot might be a good option for you. Stop by Jiva Med Spa in Dayton and Columbus for more information on how the Priapus shot through one of our providers might answer some of your sexual problems.