At Jiva Med Spa in Columbus and Dayton, Ohio, we have industry-leading tattoo removal technology including PicoSure and Enlighten machines, and we have years of experience removing tattoos of every color, shape, and size.

Who said tattoos are forever? Although the decision to get inked is a very personal one, it’s not uncommon to regret that decision down the road.

Tattoos are more popular than ever before. Although they used to be associated with some subculture or another, popular with bikers, pirates, ex-cons, and rock stars, today they’re extremely common. According to a recent Ipsos poll, “three in ten (30%) of Americans have at least one tattoo, an increase from 21% in 2012. The vast majority of those with at least one tattoo (92%) say they are happy with it, and forty-six percent of respondents have had at least one tattoo for more than ten years.” Long gone are the days when people warned against getting a tattoo in fear that a future employer would turn them away. Today, tattoos are simply a form of self-expression, akin to a new hair cut or funky nail color.

However, that said, tattoos aren’t always perfect, and a symbol that used to be of significance to somebody may lose its meaning over time. According to Healthline, “it’s not unusual for a person to change their mind after getting a tattoo. In fact, one survey says 75 percent of their 600 respondents admitted to regretting at least one of their tattoos.” The reasons for tattoo regret vary – some people say they were too young when they got the tattoo; others say the tattoo no longer fits their preferred lifestyle. No matter what the reason, tattoo removal technology can help in a dramatic way.

In this blog, we’ll explore frequently asked questions about the process of tattoo removal and explain the different technology options that people can choose from for optimal, ink-free results. First, let’s start with the basics.

What Is A Tattoo?

Tattoos are an ancient and common form of body modification, and they work by injecting ink into a person’s skin. According to HowStuffWorks, “to do this, they use an electrically powered tattoo machine that resembles (and sounds like) a dental drill. The machine moves a solid needle up and down to puncture the skin between 50 and 3,000 times per minute.” As the skin gets punctured, insoluble ink flows down into the tiny puncture wounds and permanently stains the surrounding skin.

Why Are Tattoos Permanent?

When a tattoo needle punctures the skin, it bypasses the outermost epidermis layer of the skin and deposits ink in the deeper dermis layer. Compared to the epidermis, the cells of the dermis are much more stable, so the tattoo’s ink will stay in place permanently. You can wash, scrub, and rub a tattoo all you want – since the ink is technically “underneath” the skin’s top surface, it won’t go away no matter how much you touch it.

Why Do Tattoos Fade Over Time?

Although tattoos are permanent, tattoo ink is technically a foreign substance, and the body’s immune system will work its magic over time to try and eat away at that tattoo ink and eliminate it through the body’s natural metabolic system. That’s why a 20-year-old tattoo will often look different than a one-year-old tattoo; it might appear lighter, or even blurred at the edges. According to Science Focus, “macrophage cells from your immune system will gradually absorb [tattoo ink] and disperse it. And the UV frequencies in sunlight are energetic enough to break down the ink molecules over time, so tattoos that are always exposed – such as on the fingers or face – fade quicker than those covered by clothing.”

How Does Tattoo Removal Work?

If you ever decide that you’re sick of your tattoo – or tattoos – you’re not alone. Thankfully, tattoo removal is made possible by specific laser machines that produce pulses of light energy. According to New Look Laser College, “each pulse of energy penetrates the skin and is absorbed by the tattoo ink. As the tattoo ink particles absorb the energy, they heat up and then shatter into tiny fragments.” When the ink particles are broken up by the laser, they can be more easily metabolized by the body’s immune system. Over the following weeks, your body’s cells will naturally flush the ink particles away from the original tattoo location, which lightens the appearance of the tattoo over time.

How Many Sessions Will You Need?

Tattoo removal doesn’t happen overnight (wouldn’t that be nice?), and it’s essential to space out each session to allow your body’s immune system to do its job of removing the shattered tattoo ink particles. After each tattoo removal session, your tattoo will appear lighter, but it will take multiple sessions to get rid of it completely. The number of tattoo removal sessions you’ll need depends on the size and location of your tattoo. As a rule, the farther a tattoo is from your heart, the more difficult it will be to remove. For example, a tattoo on the foot may take longer to remove vs. a tattoo on the shoulder.

On average, most tattoos require between 5 and 10 treatments to achieve complete removal, and the treatments must be spaced at least 6 weeks apart.

If you could stand to sit through your original tattoo session, it’s likely that you won’t have a problem with the removal process. It’s a common misconception that tattoo removal is extremely painful, but if you go to a reputable tattoo removal center, they’ll do everything in their power to minimize your discomfort. According to Self.com, “laser tattoo removal can be painless, but that’s usually because practitioners can give you a numbing agent first. For larger tattoos where the removal process takes longer, a doctor can give you a lidocaine injection to numb the area, whereas a non-medical professional might not.” If you’re worried about what the tattoo removal process will feel like, remember this: discomfort is temporary, but after you remove a tattoo, it’s gone for good. 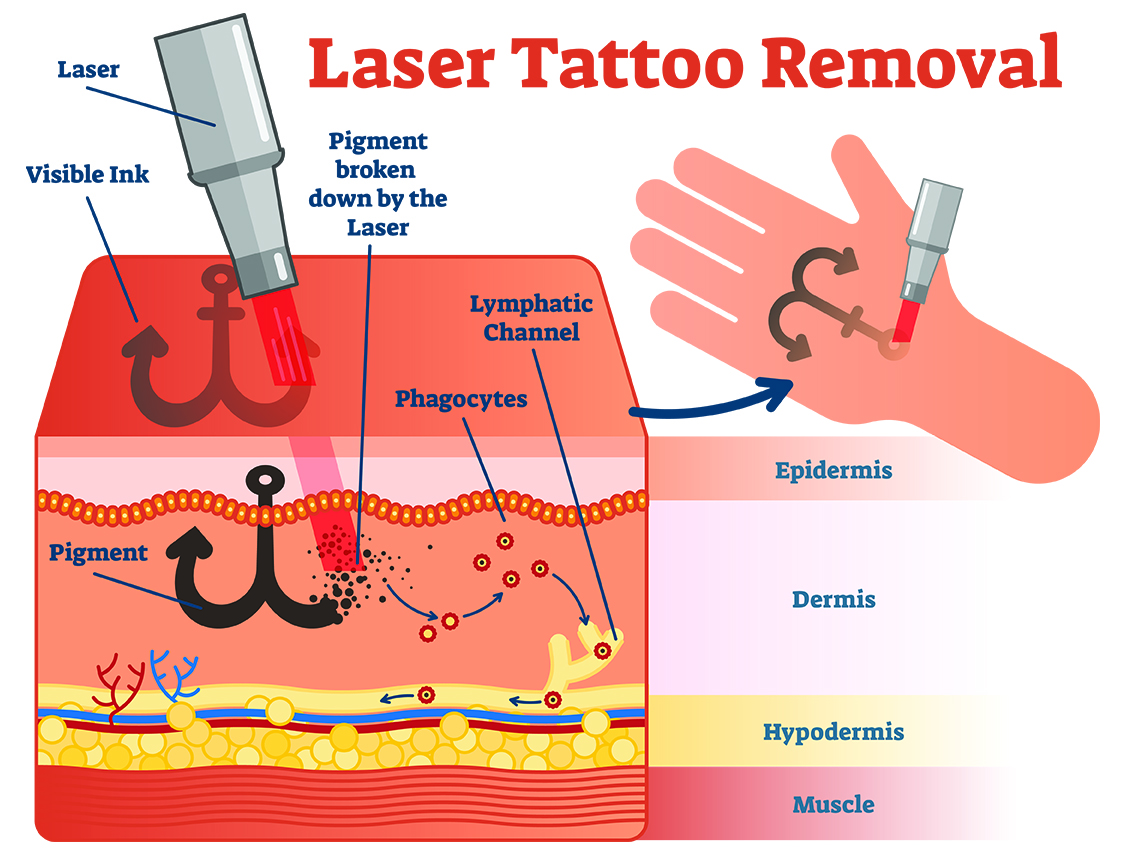 What’s The Difference Between PicoSure Vs. Enlighten?

The #1 consideration you need to be aware of when shopping around for a tattoo removal specialist is the type of tattoo removal machines they offer. Old, outdated technology will not only be more painful, but it will also require many more sessions to completely destroy your tattoo’s ink particles so they can be removed by your body’s immune response. Two industry-leading tattoo removal machines that are currently on the market are PicoSure and Enlighten. So, what’s the difference?

1) All About Tattoo Removal With PicoSure

According to its manufacturer, Cynosure, Inc., the PicoSure tattoo removal machine is “the first of a new generation of aesthetic lasers that don’t rely solely on heat to burn or melt away unwanted tattoo ink or melanin, the pigment that causes dark spots in your skin.” Instead of relying on heat like traditional tattoo removal technologies, the PicoSure machine delivers concentrated, ultra-rapid energy to the tattoo in question, causing the pigment particles to vibrate and shatter without burning, irritating, or harming surrounding skin tissue. Not only is PicoSure an excellent tattoo removal technology, but the machine can also address a number of aesthetic concerns like wrinkles, acne scars, freckles, sunspots, and discoloration.

2) All About Tattoo Removal With Enlighten

Enlighten, on the other hand, is manufacturer by Cutera – a leader in the medical aesthetic laser technology industry. According to Cutera, the Enlighten system is an industry-leading platform for tattoo removal, and “it’s the first system on the market to feature both nanosecond and picosecond pulse durations and the ideal blend of parameters – the correct wavelengths, the correct spot sizes, and the correct energy levels – to effectively address unwanted pigment and ink.” Like the PicoSure machine, Enlighten delivers ultra-short pulse durations that shatter the targeted pigment without causing thermal damage to the tissue that surrounds it. And also, like PicoSure, Enlighten can be used to address aesthetic concerns such as fine lines and wrinkles, and sagging skin.

What Are The Hardest Tattoos To Remove?

Although PicoSure and Enlighten are both industry-leading tattoo removal machines, not all tattoos are created equal, and some are more difficult to remove than others. According to LaserAway.com, “black tattoos are the easiest to remove because the laser is able to target the black pigment more precisely. Other colors such as red, blues, and greens can become more difficult to remove depending whether the tattoos were amateur or professional.”

Additionally, the bigger the tattoo, the more sessions it will require. Non-smokers generally have better success with tattoo removal, since cigarette smoke can damage the function of essential cells that are responsible for breaking down and eliminating shattered ink particles from the body. Additionally, tattoos on the lower arms and legs can be more difficult to remove since there is reduced blood circulation in those areas of the body, and post-treatment healing periods may be prolonged.

How Can I Help My Tattoo Removal Process Go Smoother?

First and foremost, if you want to get the best tattoo removal results, do your research. Just like tattoo artists are not created equal, neither are tattoo removal experts. According to InkRevoke.com, a few other things you can do include: drink more water, boost circulation by exercising regularly, eat a healthy diet with lots of fruits and veggies, reduce stress as much as possible, get plenty of sleep, avoid any type of infection that might affect your immune system’s response, quit smoking or at least cut back on your habit, wear clothing layers and/or SPF to protect your skin between tattoo removal sessions, and – of course – follow all aftercare instructions from your tattoo removal provider.

Where Is The Best Place To Get Your Tattoo Removed?

We can’t wait to connect!